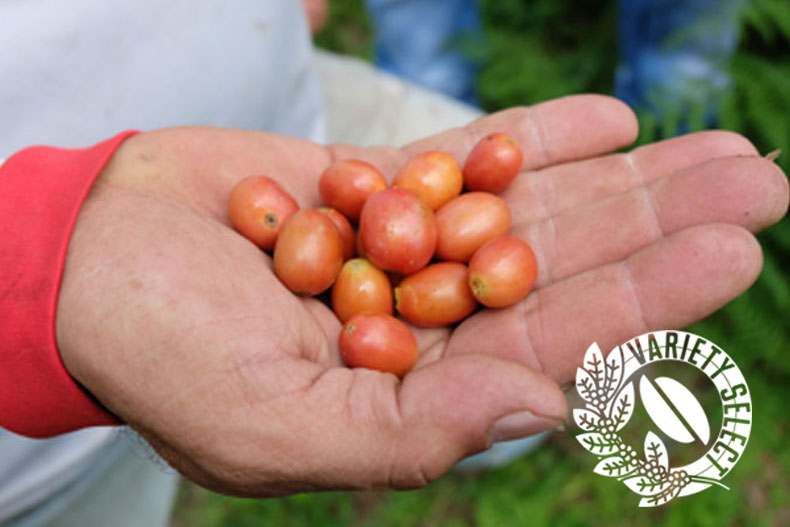 A few producers located in Huila have on their farms a coffee tree with a different characteristic: Cherry ripen to be pink!

The story of this coffee is quiet interesting. It all started with Rodrigo Sanchez, a producer from the municipality of Palestina. Rodrigo organizes the producers from Palestina and other municipalities to bring their coffee to market. One day he got the chance to cup the Pink Bourbon, and he was amazed with the cupping results. At that time, he was one of the only people who knew about the odd tree, and locally began to conduct research to find out where this coffee was coming from, and which producers had it. We were told about a producer who has the coffee as well; his name is Evelio Artunduga.

Don Evelio has a farm located in San Adolfo region at 1860 meters. In his farm he has Caturra, Colombia, and Pink Bourbon. He took us to see the Pink Bourbon, and we were amazed to see the color of the cherry. He explained that the variety has more resistance to rust, has a good amount of yield, and doesn’t require too much fertilizer. Our next question was how he got the seeds. To our surprise, he told us he got the seeds from Edgar Motta, another producer.

So we continued our journey to visit Edgar Motta. We arrived to his beautiful 80-hectare farm, with 50 hectares planted with coffee. He has Caturra, Bourbon, and Pink Bourbon. We asked the same question: How did he get the seeds? His reply was again surprising. He got the seed from Gabriel Castaño, another producer. But Edgar assures that Gabriel was the one who had the coffee first.

We visit Gabriel Castaño;, located in San Adolfo. We had just on thing in mind: Visit the producer who distributed the Pink Bourbon seeds. We arrived to Don Gabriel farm; he welcomed us and gave us a tour to his farm. As soon as we started the tour, we saw several Pink Bourbon trees. He told us that the trees have been there for a while, but he had never processed them separately. Now, he and the other producers mill the pink cherry separately in order to have just Pink Bourbon cherries, and the result is a tasty cup.

Pink Bourbon: Cultivated from hybridization of Red and Yellow Bourbon. It's very rare, but the producers say it is quite resistant to rust. Pink and Orange Bourbons are very difficult to produce with consistency. The recessive genes leading to the expression of these colors are easily thwarted by the presence of yellow and red genes in a given pollen grain. A carefully isolated and contained lot can do quite well and preserve the unique color and character of this variety, though this is quite hard to find.

Read this blog to learn more about our Variety Select project.