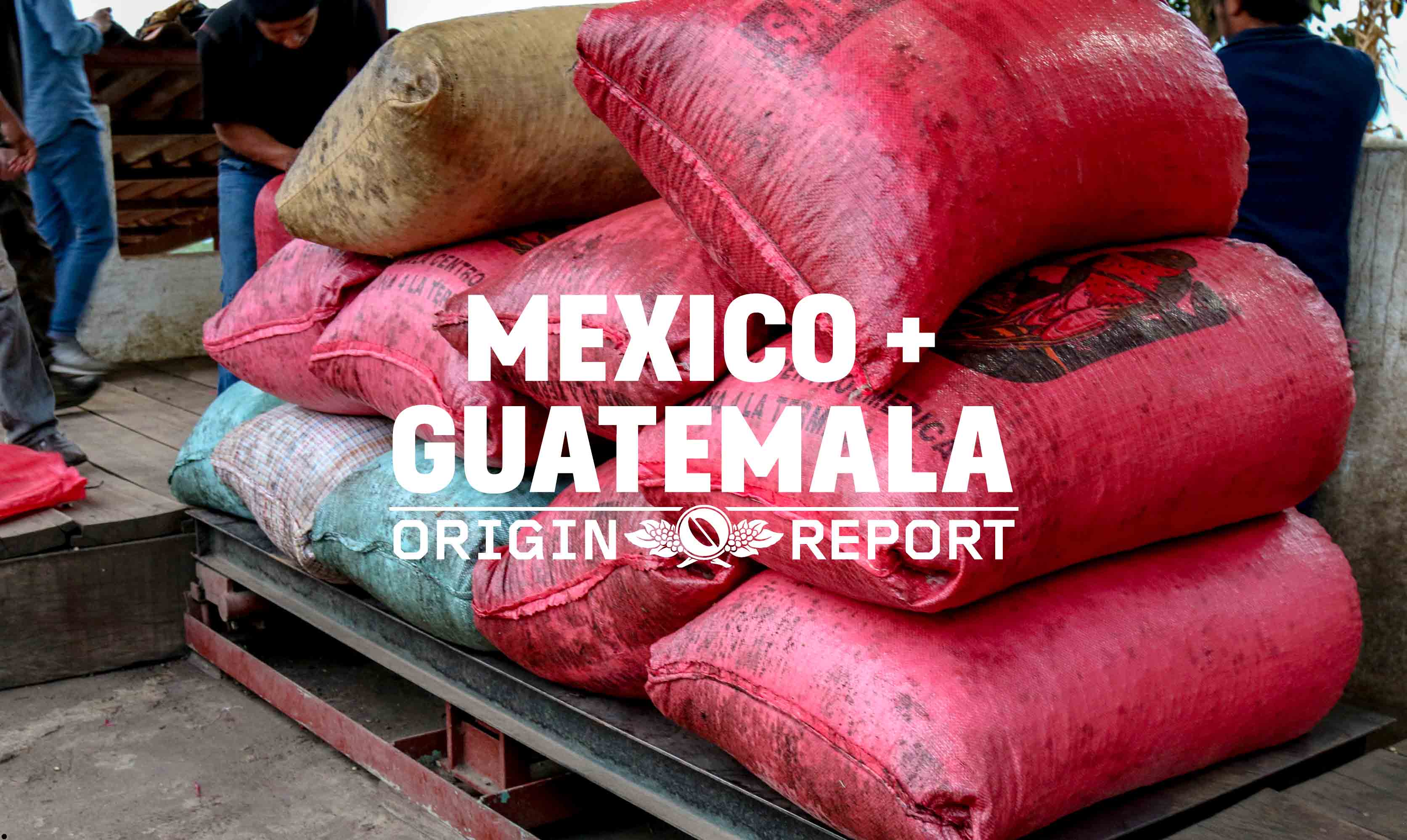 Sometimes the easiest things to overlook are those that are right under our noses—or, in the case of Mexico, perhaps right under our borders. Mexico should have everything going for it as a growing country: Its close proximity to the U.S.A. means shipping and receiving coffees is a relative breeze. It’s full of good varieties farmed sustainably, with a high percentage of certified coffees (both Fair Trade and organic). And it has huge development potential from a quality standpoint. Yet Mexico has seemed to be passed over unenthusiastically for the past few years, considered best for “bulk” or blending lots that are hard to get excited about.

Perhaps ironically, however, Mexico’s neighbor to the south, Guatemala, is one of the darlings of the Central American growing region—a reputation deservedly granted thanks to the exquisite profile and generally stable productivity there, of course—but the contrast in impressions among the two countries has inspired us to ask whether the grass is really greener on the other side? What difference does a border make? How can we bridge that gap not only in our perception of the coffees, but also manage to equalize them to and with our customers?

A recent sourcing trip to the near-neighbor regions of Chiapas in Mexico and Huehuetenango in Guatemala offered us an opportunity to examine this question and check in on the status of both countries’ crops this harvest, especially as they both work (in very different ways) to recover from several long years of hardship caused by bad weather and a resulting outbreak of coffee-leaf rust, which led to low yields and diminished quality. This year is promising to bring better quality and better output throughout the region, but we think a bit of neighborly support and comradeship could do wonders for the future of coffee here. 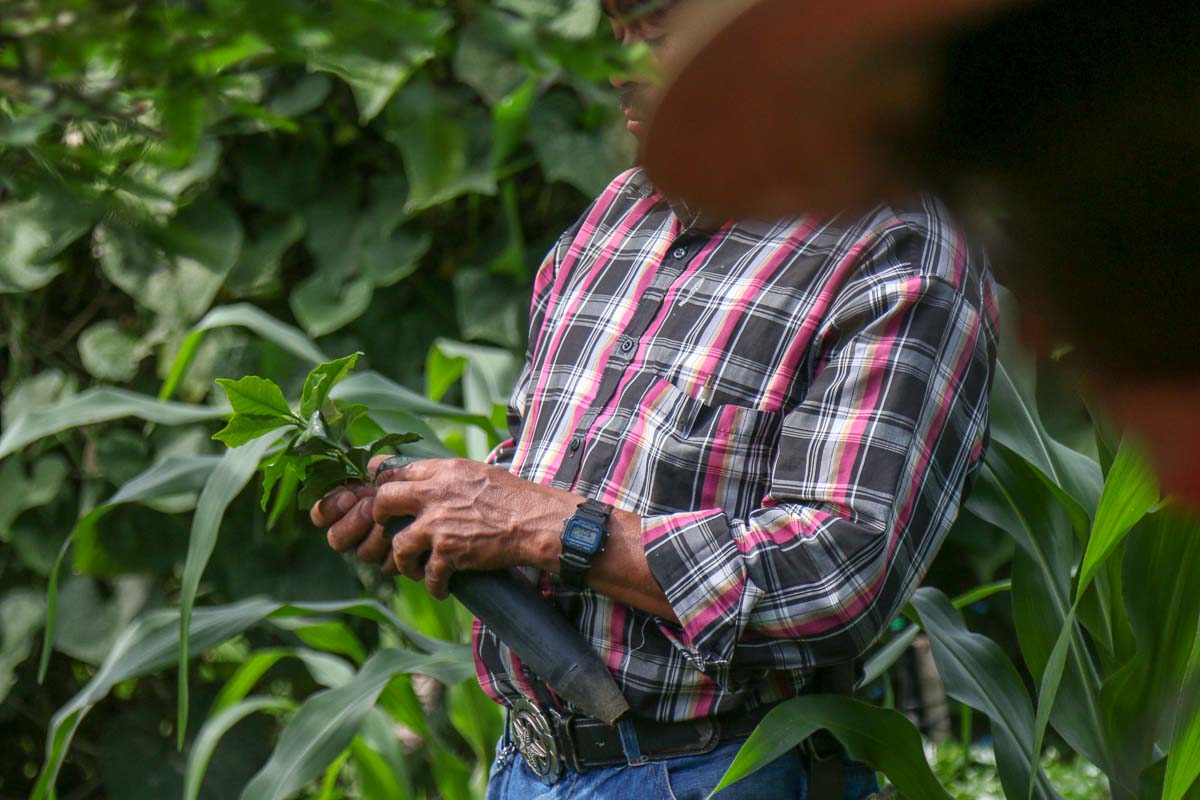 Depending on who you ask in Mexico “the situation” has been going on for something between 5–8 years now, though almost every producer knows exactly what “the situation” is: A combination of less than ideal weather conditions (off-season rains, unexpected humidity, extreme cold) that made swaths of Mexico, especially Veracruz and Chiapas, particularly inhospitable to coffee but, conversely, very hospitable to coffee-leaf rust. Rust, or Hemileia vastatrix, is a fungus identifiable by the yellowish spots it creates on leaves, and it essentially chokes the plant’s ability to produce mature cherry.

While the disease has been known (and has been deeply destructive) since the 19th century, outbreaks of it have waxed and waned over the generations. In the early 2010s, however, it waxed enormously throughout Mesoamerica, wreaking enough havoc for some producing nations to declare a state of emergency in the coffee lands. Climate change is to blame here: Wet and warm conditions are heaven for Hemileia, and suddenly areas of coffee farms that were previously thought safe—say, regions above 1,000 meters high, or those with cooler ambient temperatures—were becoming infected as well, the disease thriving there like athlete’s foot on the high-school locker-room floor.

To make matters worse, the coffees that are the most susceptible are also arguably the ones most interesting to quality-focused buyers and were among the most prominent found in Mexico: Typicas, Caturras, Bourbons. The country’s long dominance of the certified-organic coffee market wasn’t much help, either: Without aggressive agrochemical treatments and prevention, producers had no choice but to uproot affected plants. Many farmers replaced the coffee with altogether different crops; others simply walked away from the land. Those who decided to hang on with coffee weren’t sure when they’d see relief, and even now the numbers don’t tell all: Mexico’s yields, which had been at 5–6 million bags in the early 2000s, have dipped to about 3.5 million, with overall quality taking a hit as well. 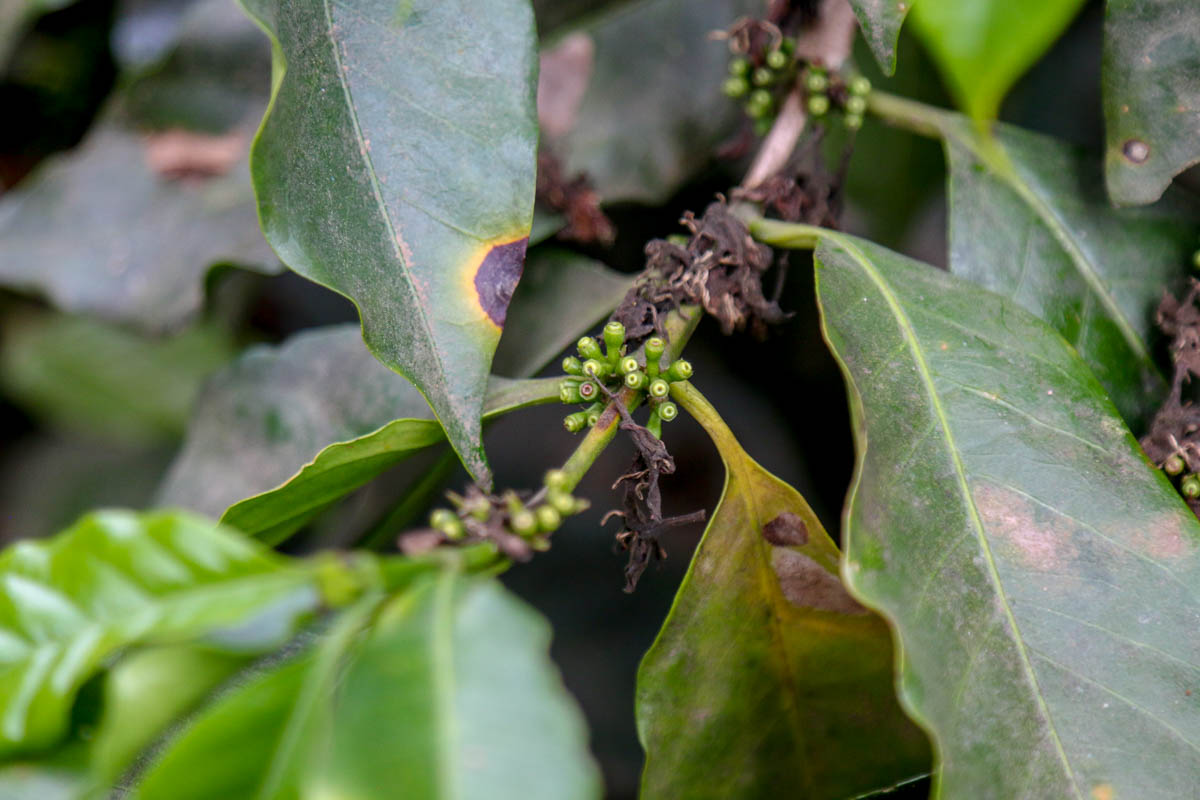 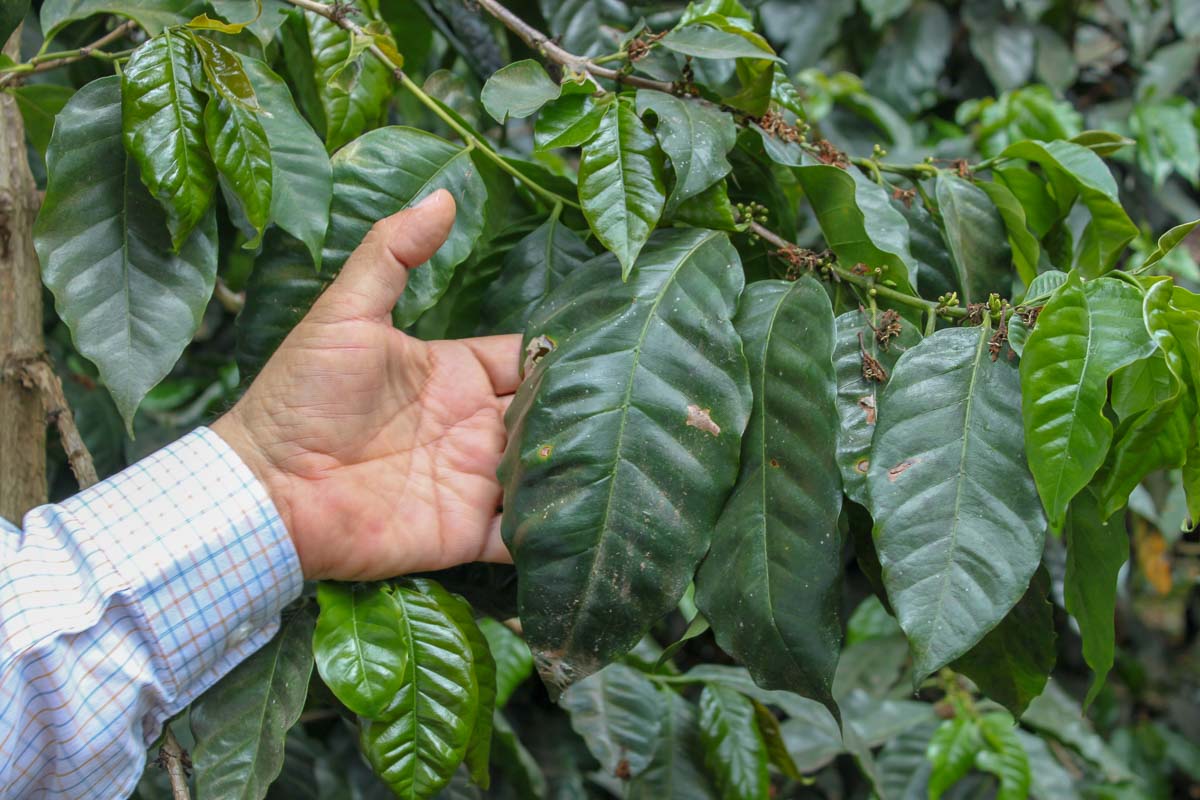 After several years of struggle, however, Mexico is finally on an upswing in both production and profile, thanks in part to widespread estate-renovation efforts and ambitious replanting of farms with more rust-tolerant or resistant varieties. Plants were comparably bursting with cherries this season, and the cups have been better than we’ve seen in years—yet, Mexico isn’t out of the proverbial forest. The cyclical nature of supply and demand has farther-reaching implications than a simple equation of “more coffee = more buyers.”

For one thing, labor has been in increasing shortage since the rust outbreak, since pickers moved on to find other work that paid better and more reliably than the dwindling coffee sector could offer. Now that there’s cherry, there are no hands to harvest it, which adds significantly to the cost of production as farmers desperately try to incentivize laborers during the season. “There was and still is like a crisis of confidence,” says Omar Herrera, Cafe Imports sales representative and manager of the La Bodega small-bag program. “It wasn’t the coffee, they’re confident about the quality now. The continuing struggle isn’t necessarily the diseases and the plagues themselves, but kind of like the lack of enthusiasm, a lack of buyers, and a huge lack of coffee travel.”

Omar, who is currently based out of Cafe Imports’ office in San Jose, Costa Rica, has seen first-hand the impact that coffee travel has on producer morale, as well as how disappointing and isolating it can be for growers when contact stops in hard times. Along with senior green-coffee buyer Piero Cristiani, Omar led a sourcing trip to visit our producing partners in the area around the Triunfo Verde Biosphere Reserve in Chiapas, as well as to Huehuetenango in Guatemala. He says that there was a kind of palpable anxiety among the growers they met in Mexico—not about the quality of their coffee, which is stronger than it has been in years, but in the hope and prayer that buyers will come back like the crops themselves have.

“You hear this from every producer, even in Costa Rica, right?” Omar says. “You’re having a conversation about the harvest and then there’s that semi-awkward moment where it’s like, ‘And now you guys have to buy it.’” Usually it’s said a little teasingly, because the farmers we visit almost always know we will buy their coffee, that’s the nature of the relationship. In Mexico this year, however, Omar says somewhat sadly, “They were actually like, ‘I hope to G-d someone wants to buy this coffee.’” 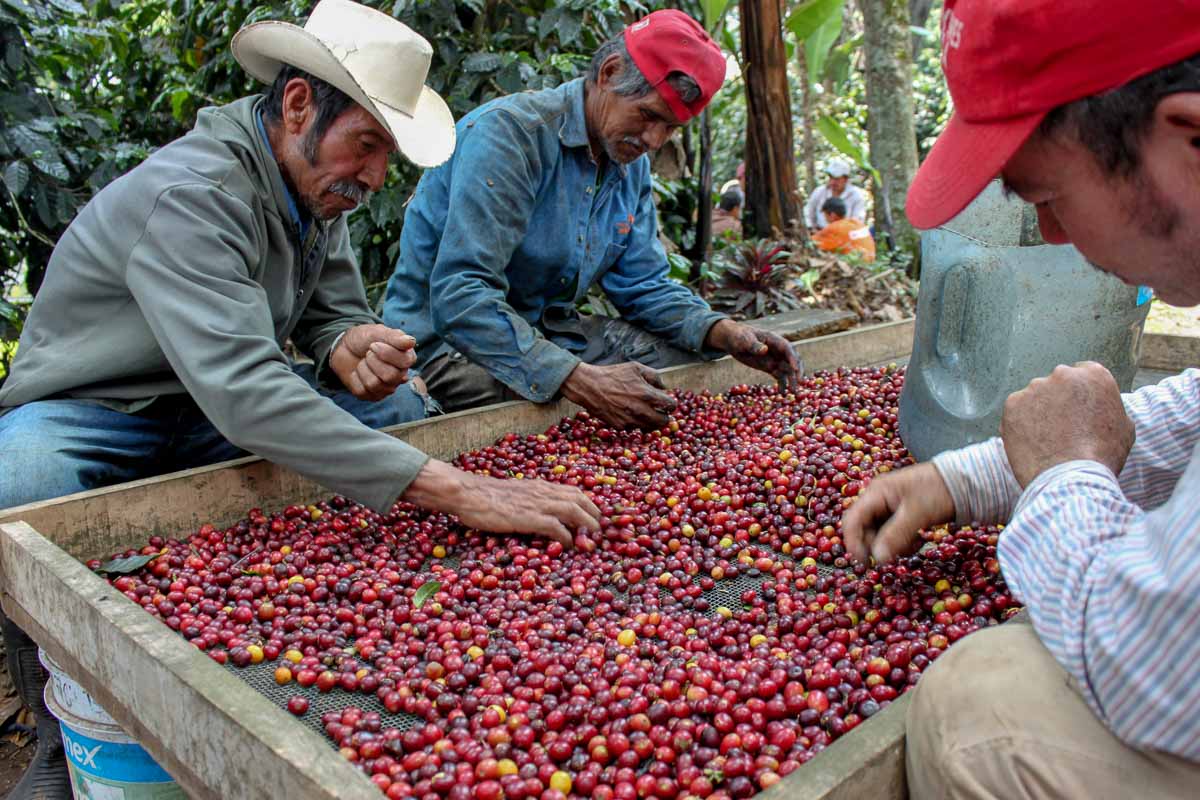 Our job as importers, of course, is to calm that anxiety for producers by not only buying the coffee ourselves, sourcing with gusto and offering the assurance of a continuing partnership. We can only do our job well if our customers do their job as well, which, naturally, means there needs to be end buyers for these coffees—that’s the cyclical piece, the give and take of the agricultural side of specialty coffee.

“We try to market it as something developmental,” Omar says. “Let’s not be afraid to buy these coffees because of low cup scores in the past; let’s be confident in buying these coffees now because we’re doing something great, and it’s going to pay off for us and for them.”

The coffees are there—we know because we’ve cupped them, solid 84–86-point container loads and a higher potential for microlots than in previous years, thanks too to widespread traceability efforts being implemented by several of our cooperative partners. Most of them are organic- and Fair Trade–certified, to boot, from growers whose emphasis on environmental conservation and social progress is a model for other regions. Talk about an underdog story, right? What’s not to love, and why not snatch these coffees up? Could it be that while the coffee next door seems commonplace, coffee two doors down is that much more exciting? 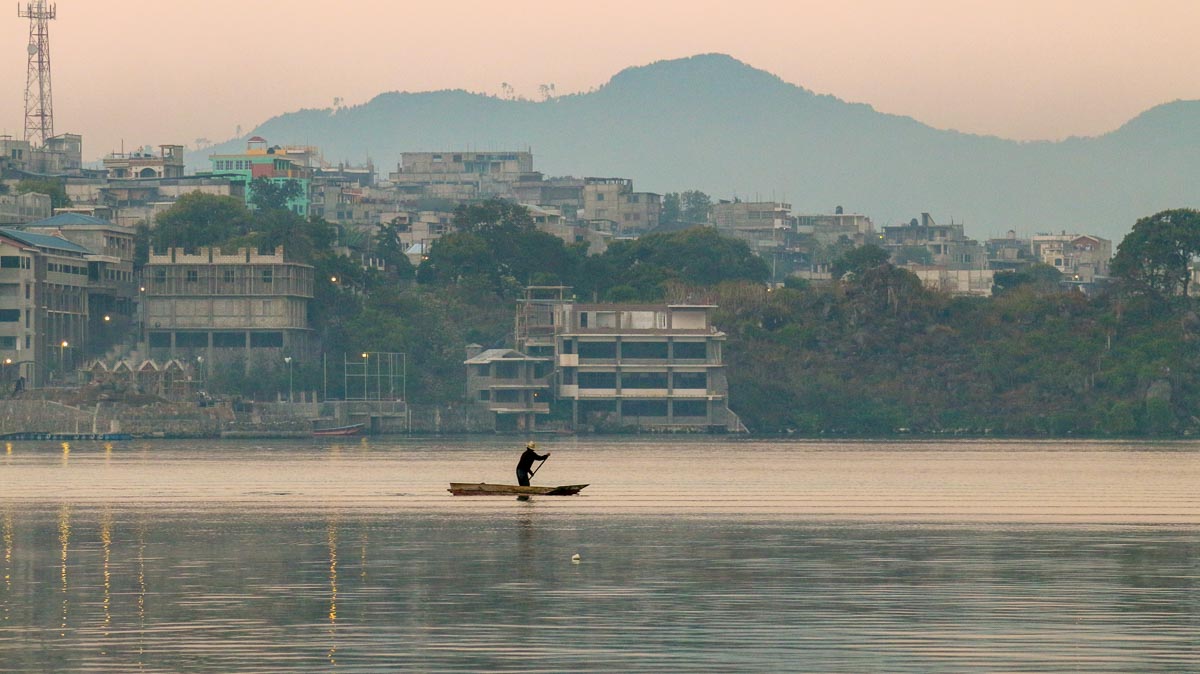 The drive from Jaltenango, in Mexico’s Chiapas state, to Huehuetenango in Guatemala takes about eight hours on mountain highways, and the relative proximity of the growing areas means that there are some similarities to the terroir and profiles the coffees express—craggy mountains and misty clouds, a wide range of altitudes, and coffees along the spectrum from simply toffee-sweet and nutty, to explosively fruity and dynamic.

Geographical closeness doesn’t always create identical situations and strife, and certainly it doesn’t always imply equal response to come-what-may. Where in Mexico, growers and co-op leaders were noticeably and actively working on securing a better future for coffee and improving quality through new (and somewhat exotic, like Geisha) varieties, in Guatemala, Omar says, he encountered much less of that type of talk, and much more confidence—new projects and new partners, and the relative ease of getting to know one another without distraction. Of course, that relative ease comes hard-earned in coffee: Guatemala’s coffee-leaf-rust crisis peaked in the 2013/14 season, when the government issued a state of emergency on the coffee sector, and major renovation projects were put underway.

“In Guatemala they were saying the production is higher than normal, and that coffees were tasting on-point,” he says. “We didn’t hear anything about a lack of confidence. People would allude to ‘the situation a couple years ago,’ but no one elaborated on it, no one really talked about new varieties. It just seemed like in Guatemala the status quo was being maintained: There wasn’t a lot of talk of the past and there wasn’t necessarily that much talk about the future.”

While the weather has continued to be a challenge, the overall cup hadn’t flagged over the past decade as much in Guate as it in neighboring Mexico. In fact, the coffees we’ve seen from our partners both new and old have been fantastic, almost better than ever—especially from the standard-bearing region of Huehuetenango, and a new-to-us nearby department, San Marcos, located just to the southwest of Huehue. 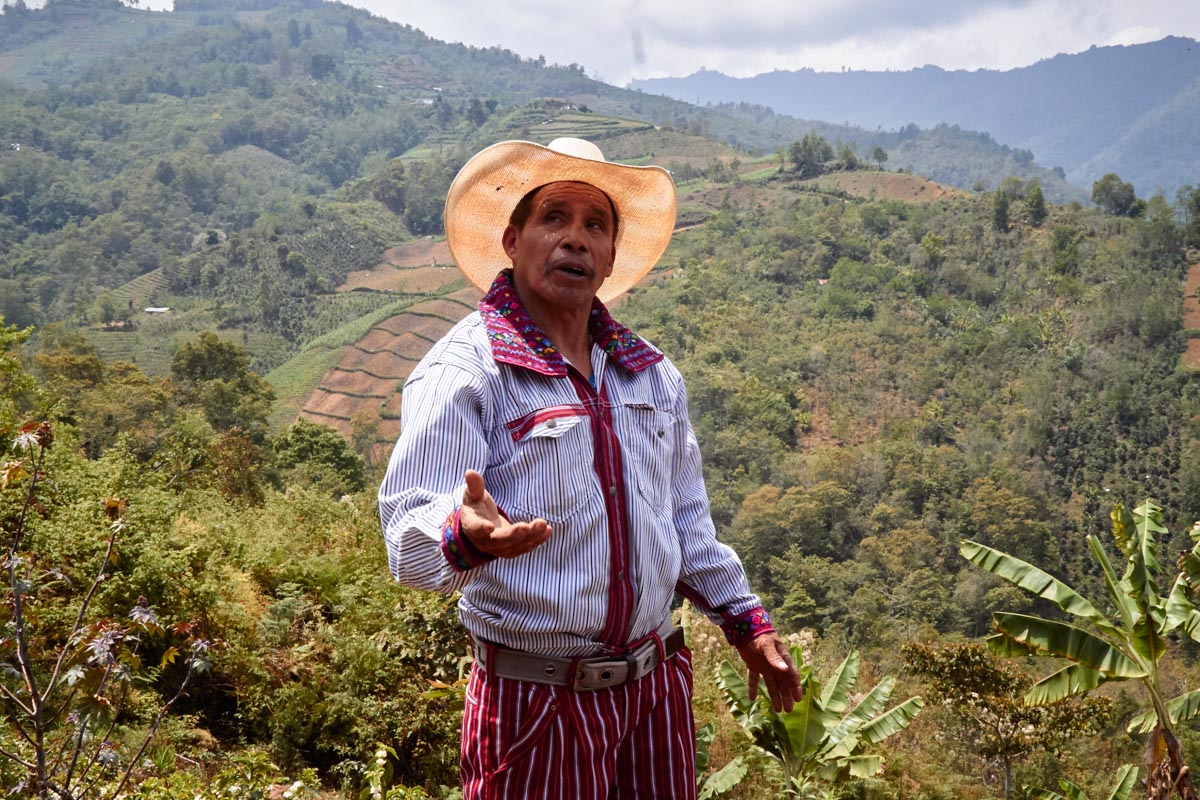 “In Guatemala we did a lot of cupping,” Omar says, “and there were a lot of really good coffees, some that I thought were solid 87, 88 points. They were tasting amazing: super fruity, lemony, and chocolatey coffees, everything from Waykans to microlots.”

He pauses just a moment before adding a “but.”

“But to be honest, there wasn’t anything we were tasting here that we weren’t tasting in Mexico,” he says with a bit of hesitation. “That’s probably a little of me wanting us to do something here, to step in and buy more coffees and help build them up. Maybe it’s also my own old thinking of well, coffees from Mexico aren’t traditionally that good—so coming in and tasting 86-point coffees was like, ‘This is amazing!’ Versus going to Guatemala and tasting 86-point coffees and thinking, ‘Yeah, this is on par.’”

Perhaps perspective—and proximity—might be what’s most at play here. Do we taste less potential because we expect less? Do those expectations end up tempering the growth and recovery in a region, then—and what would we achieve If we challenged those expectations? Why is it hard to get worked into a lather about 86-point lots from one place but not another? What can we do about it? 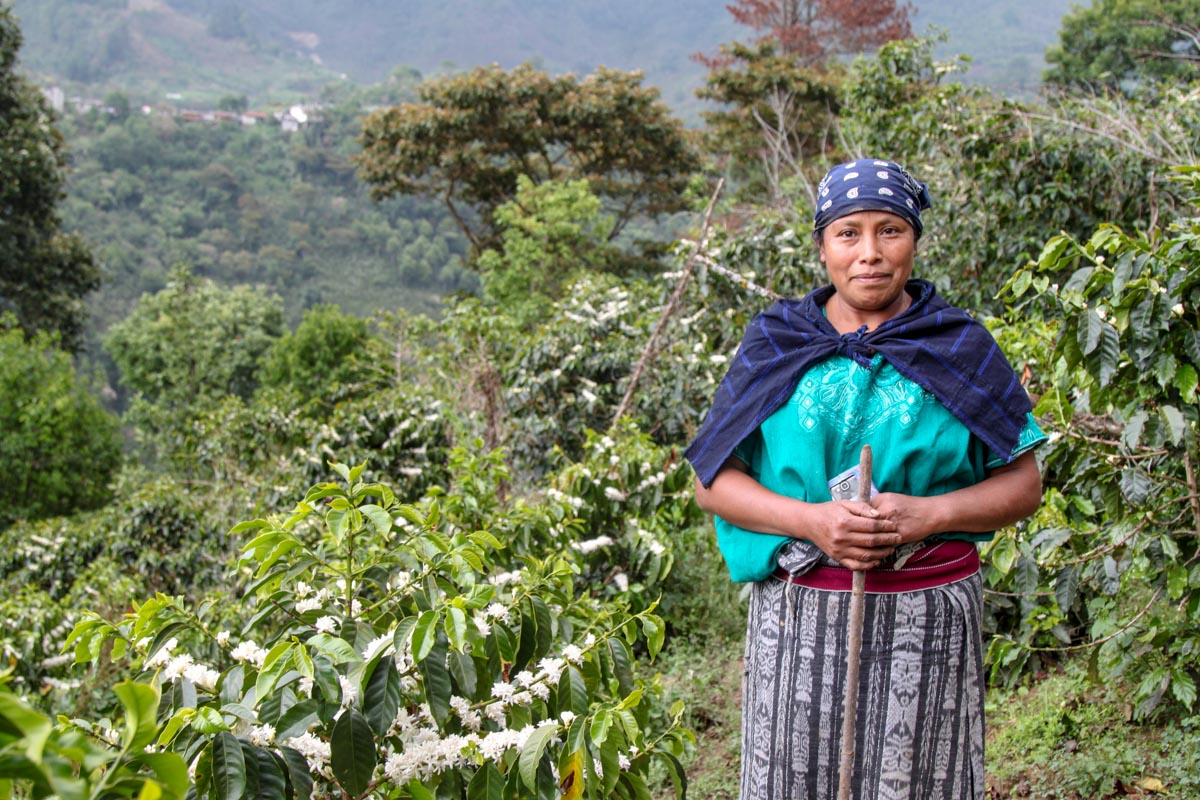 These are interesting questions, but ultimately they require a bigger conversation—one that we can’t very well have in a vacuum. As importers, we can only buy the coffees we know we can sell, otherwise we are arguably doing as much harm to the supply chain as la roya has. The only real way to cure a crisis of confidence is to address the anxiety head on, and to ask for help when it’s needed, which, ultimately, is what good neighbors do. Coffee is a community, and in a sense we’re all each other’s neighbor.

We’re thrilled to have visited with our friends just to the south, and to see them starting to thrive again after so long a period of difficulty. We hope to continue to show up for the producers of Mexico and Guatemala, to make ourselves present and to offer assistance, and we hope our roaster clients will do the same—just imagine the block party we could all throw together.

Who wouldn’t want to be part of this neighborhood?