What’s “Anaerobic Fermentation” and Why Is It So Popular All of a Sudden?

Nothing stays the same in coffee for very long, and producers are always seeking new and improved ways to differentiate themselves, moderate their coffee’s flavor profiles, and offer exciting and interesting flavors to roasters and consumers all over the world. Sometimes a little experimentation and ingenuity can go a long way without having to re-invent the wheel, which is why we’re interested in the increasing popularity of anaerobic-environment fermentation.

This isn’t so much brand-new style of processing as it is an expansion of some principles related to the natural activity that takes place in every existing process—in fact, anaerobic-environment fermentation has been practiced for a long time in some places. As it continues to expand in usage, however, we thought it warranted inclusion on our Processes page, and wanted to also offer a brief overview here to introduce the concept to anyone encountering it for the first time.

Nearly all coffee undergoes some fermentation of its fruit material, from Natural to non-mechanically Washed lots. It occurs when yeast and bacteria begin converting the sugars and acids in the coffee’s mucilage, generating different organic acids, carbon dioxide, ethyl alcohol and other compounds in the process; this continues until there’s nothing left for them to work with, or until the environment becomes inhospitable to them (such as when the coffee is fully dried to 11% internal moisture). Producers typically attempt to control and modulate the fermentation’s velocity by using open tanks, buckets, water channels, and other vessels to contain the coffee during this process, or through different techniques during the drying phase on raised beds or patios.

So what makes anaerobic-environment fermentation different? The vessels in which the coffee cherries are fermented don’t contain any oxygen at all: The oxygen is removed when the coffee is added at the beginning of the process, and valves on the tanks keep them free from oxygen seeping in during the process while also allowing CO2 to be released as it builds up during fermentation. 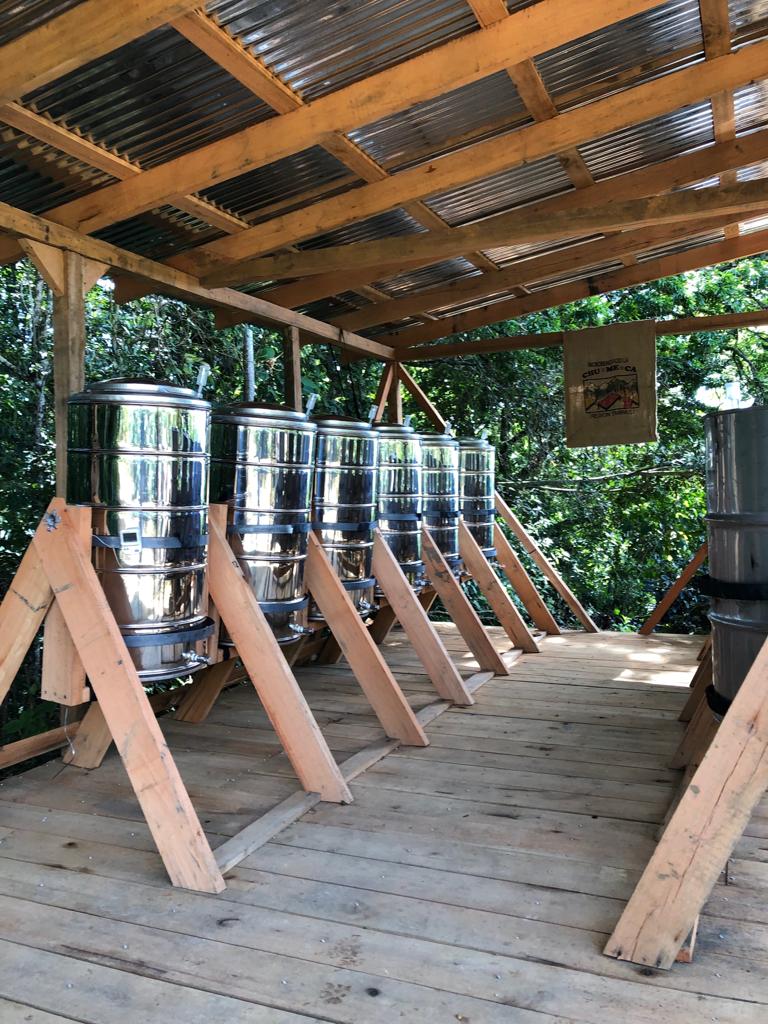 Keeping the coffee cherry enclosed creates a different profile that some producers value for its own sake; other producers use additives with the coffee cherries in an attempt to introduce different flavors and/or to affect the progress of the fermentation. (The latter is called anaerobic impregnation and sometimes features spices, molasses, tropical fruit, or other flavorings.)

Several producers with whom we work have begun incorporating small batches of anaerobic-environment fermentation to their repertoire, including Luiz Paulo Pereira in Brazil, and Martín Ureña and CoopeTarrazú in Costa Rica. Martín’s setup at La Chumeca is particularly fascinating: He uses a set of stainless-steel tanks that he imported from South Korea, and he meticulously measures the Brix of the coffee from the time of harvest (22–25 °Bx) all the way throughout the fermentation process, stopping when it drops to 16 °Bx. He also measures the temperature inside the tanks: “If there is a significant increase in the temperature inside the barrel it means that an aerobic fermentation is happening. An exothermic reaction is occurring and if it is not controlled on time, vinegar, extreme ferment, and different types of unpleasant acidic flavours can develop in the cup.” At La Chumeca, AEF coffees spend around four full days in the tanks (96 hours). The anaerobic environment slows down the yeast and bacteria activity, which is why it takes so much longer than a more “traditional” aerobic fermentation.

One of the most interesting things about Martín’s approach to anaerobic environment fermentation is that he collects the fermented coffee-cherry liquid that is naturally produced during the process and serves it as a spirit to visitors: It has an elevated alcohol content due to the conversion of sugars to alcohol by the microorganisms doing the hard work of fermentation, and it’s a strange and delicious way to say “cheers!” to the end of a good processing season.