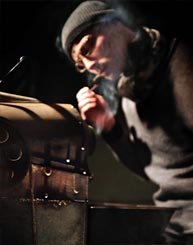 Taste buds contain the receptors for taste. They are located around the small structures on the upper surface of the tongue, soft palate, upper esophagus and epiglottis, which are called papillae. These structures are involved in detecting the five (known) elements of taste perception: salty, sour, bitter, sweet, and umami. Via small openings in the tongue epithelium, called taste pores, parts of the food dissolved in saliva come into contact with taste receptors. These are located on top of the taste receptor cells that constitute the taste buds. The taste receptor cells send information detected by clusters of various receptors and ion channels to the gustatory areas of the brain via the seventh, ninth and tenth cranial nerves. 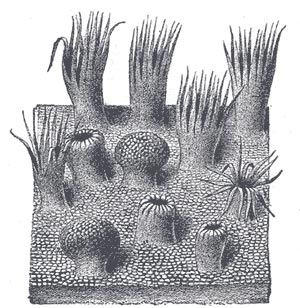 Working back in the quality-control lab, Ian processes between 288,000–1,152,000 taste-bud signals via his seventh, ninth, and tenth cranial nerves every day. In addition to this, he can often be found preparing, roasting, and cataloging the green-coffee samples cupped every day at Cafe Imports.

In the spring of 2012, Ian and his 2,000–8,000 taste buds were ordained as a Buddhist priest in the Soto Zen lineage of Katagiri Roshi. Marrying and burying requests will be handled, outside of regular business hours, on a first-come, first-served basis.

Here’s what the people are saying:

“How do you describe Ian? Well, it’s like trying to describe a wine you really enjoy. It’s impossible. You can describe traits, but that doesn’t really capture it.” –Jamin Haddox

“This is quite possibly the greatest thing I have read in a long, long time.”  –Noah Namowicz, senior vice president of sales

“These chairs are so unstable.” –Piero Cristiani, senior green-coffee buyer