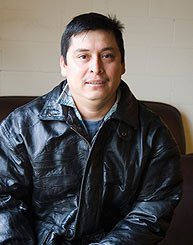 Born on June 23, 1970, Ramiro Mendoza is the jokester of the warehouse at Cafe Imports. He came to the United States in 1995 and eventually found his home here at Cafe Imports in 2004, where he finds himself to be very content. He and his wife, Armanda, are the proud parents of three children: Veronica, Judy, and Avi.

Taquitos de carne asada are his food of choice and he swears that they just don't taste as good without an ice-cold Coca-Cola on the side. His wife often has to remind him to keep it down as he sings his favorite Mariachi and Norteña tunes in the shower or in the car.

Ramiro does his best to avoid the angry people of this world at all costs and admits that even his jokes aren't funny enough to cheer them up. His most frightening moment was when he was rear-ended by a huge van on the freeway. The van hit him so hard that even he forgot his jokes then, but he is glad to be alive.

His next travel destination he hopes will be on a tour throughout the universe where he could check out the moon first-hand. Beam me up, Scotty!