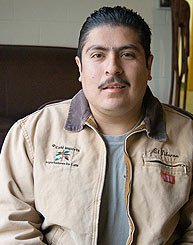 Raymundo Navarro was born on August 23, 1978 in Guadalajara, Jalisco, Mexico—the land of tequila and Mariachis. He comes from a poor but very humble and noble family. As a young boy, he worked hard at his father's side farming corn and beans while attending school in the afternoons. When he grew older, he had to leave school to work and help out his family economically.

Mundo came to the United States in 1996 to look for work, leaving his girlfriend, friends, family, and his Mexico. Now he's here to attain the "American Dream." Currently he lives in Roseville, Minn., with his wife Diana, who is from Laredo, Texas, and their daughter, Ahtziri.

In his free time, Mundo likes to go out with his family, and also enjoys playing soccer. Tortas ahogadas, or "drowning tortas," a traditional platter of Guadalajara, is his favorite food, and he has a strong dislike for snow.

Mundo began working here at Cafe Imports in October of 2000, and he is happy to be working as warehouse manager. He says, "They've helped me a great deal at Cafe Imports, I am very thankful for everything."